Ouzo has its roots in tsipouro, which is said to have been the pet project of a group of 14th-century monks living in a monastery on Mount Athos. One version of it was flavoured with anise. This version eventually came to be called ouzo.

Ouzo Loukatos, scented with anise that lasts and discreet notes of mastic, has a strong and memorable character. It accompanies delicious appetisers and blends smoothly with sea flavours.

Ouzo is traditionally mixed with water, becoming cloudy white, sometimes with a faint blue tinge, and served with ice cubes in a small glass. Ouzo can also be drunk straight from a shot glass. Ouzo is widely consumed in Greece.

Enjoy straight or with cold water/ice. The most adventurous mix ouzo with orange juice or lemonade.

Spirit type: Anise Aperitif Liquor
Region: Achaia
Characteristics: The anise Flavor is prominent and well defined, but deepened with herb, pepper and hint of lemon. It is strong and clean. When mixed with water it turns milky white with a blue tint.
Alcohol: 40% by volume 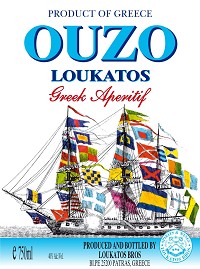